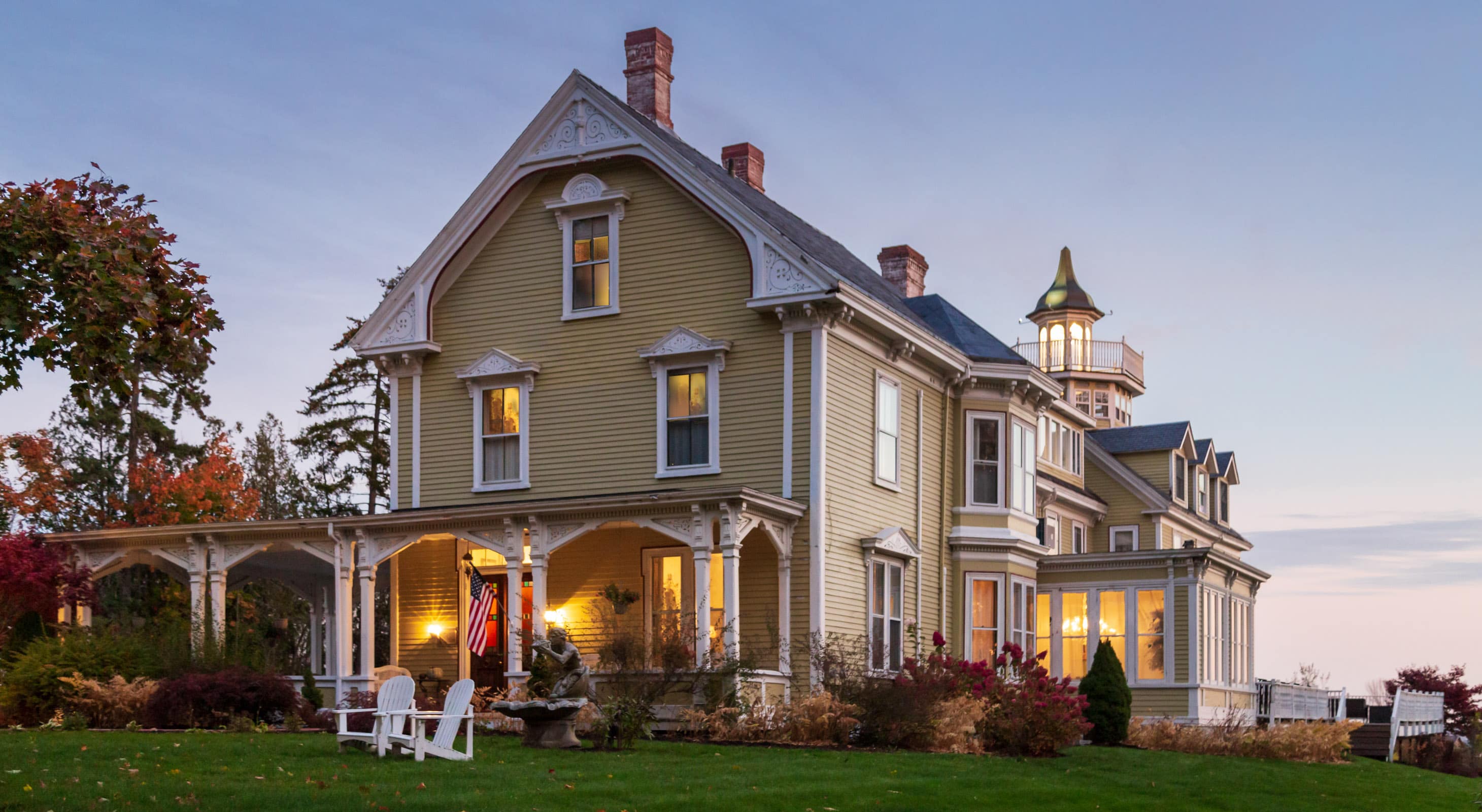 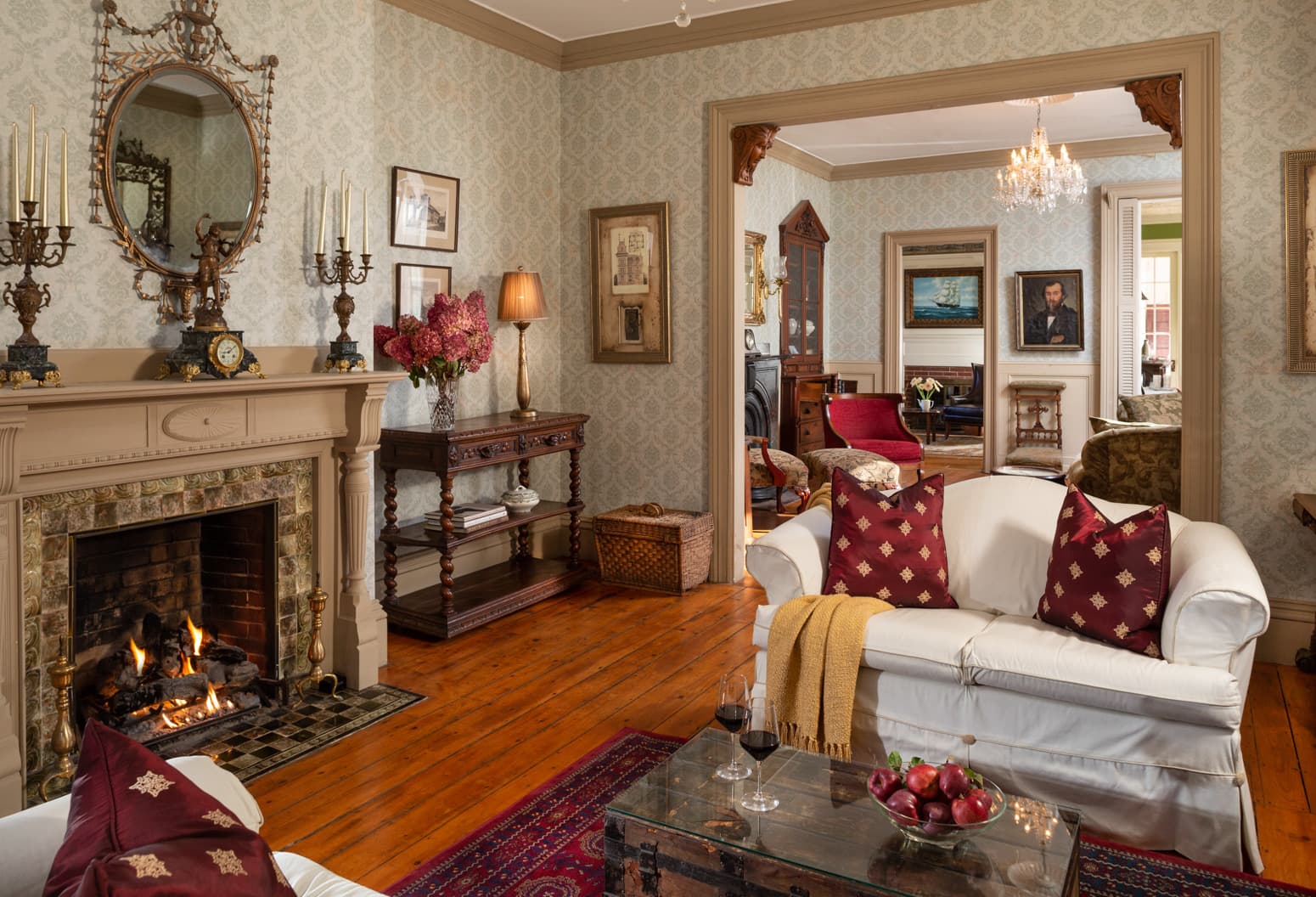 Captain Albert Vinal Nickels was a seafaring gent who claimed this spectacular waterfront parcel of land for his family. Completed in 1874, he and his wife of 14 years, Elizabeth McGilvery Nickels, raised their family of five here. The brood continued to expand with three more children born to the couple after they settled here.

While the family had no problem finding their sea legs (Elizabeth gave birth to two of the couple’s eight children while aboard their vessel), they were equally at home as landlubbers. As the decades passed, the property changed hands several times. One notable owner was Everett Hurd, who lived here from the 1950s until his death in 1975. Hurd played an instrumental role in the demise of the Brady Gang who wreaked havoc on a cross-country crime spree that ended with their apprehension in Bangor, Maine, in 1937.

This Maine B&B has earned its position on the National Register of Historic Places and is one of the area’s most romantic hideaways featuring a cache of well-appointed rooms and suites with motifs and furnishings reflecting the inn’s splendid maritime history and various ports throughout the world.

Beyond this seaside sanctuary is an area ripe for exploration. Discover historic Downtown Belfast just nine minutes from the Inn brimming with shops and restaurants or embark on a Classic Maine Lobster Boat. Immerse yourself in Searsport’s rich history with a visit to the Penobscot Marine Museum where guests are educated on the families that settled in Searsport and grew it to the prominent port it is today.

Captain Nickels built this home as a place for all to enjoy. We continue to pay homage to his legacy by welcoming guests near and far for an unforgettable stay. 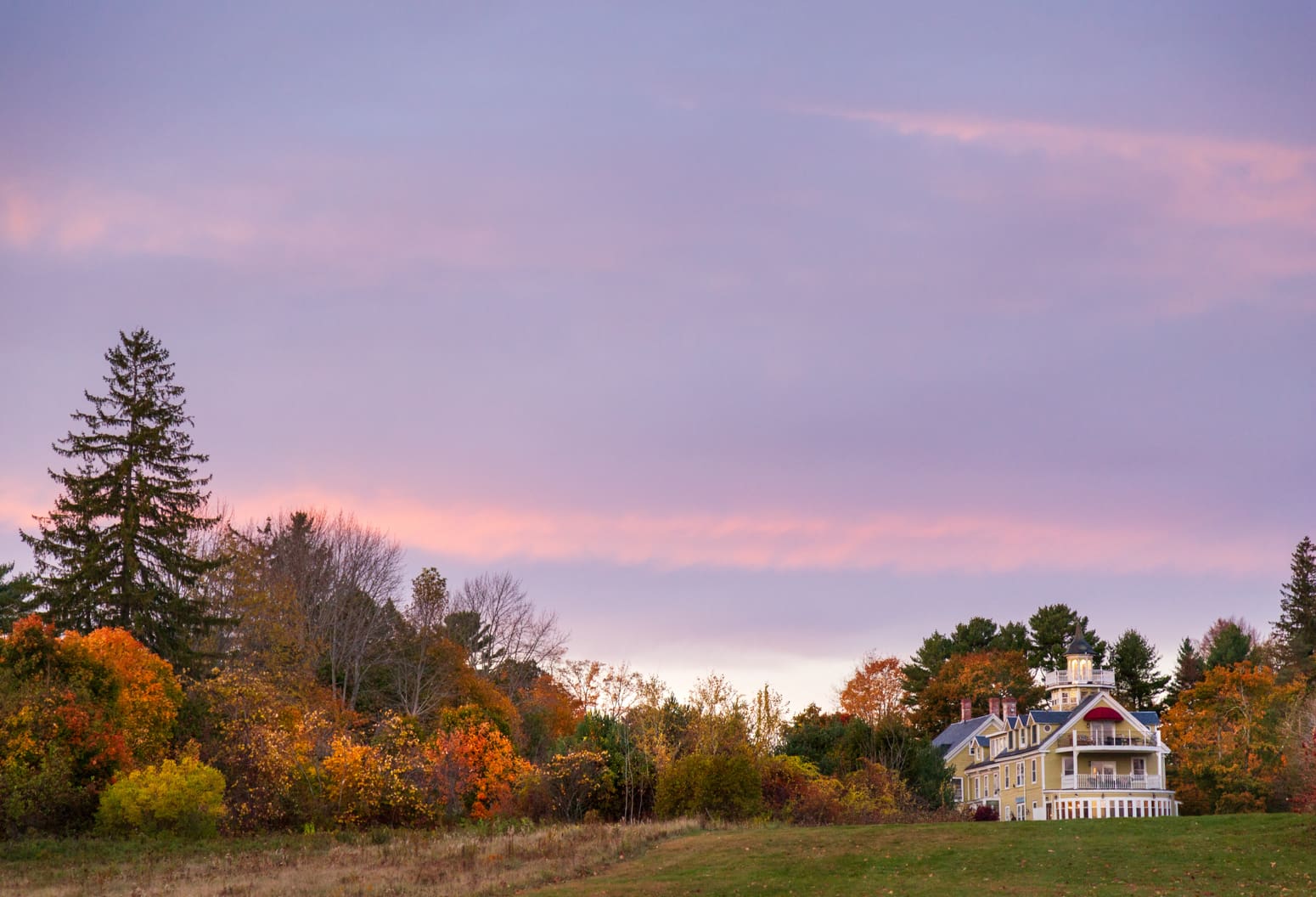 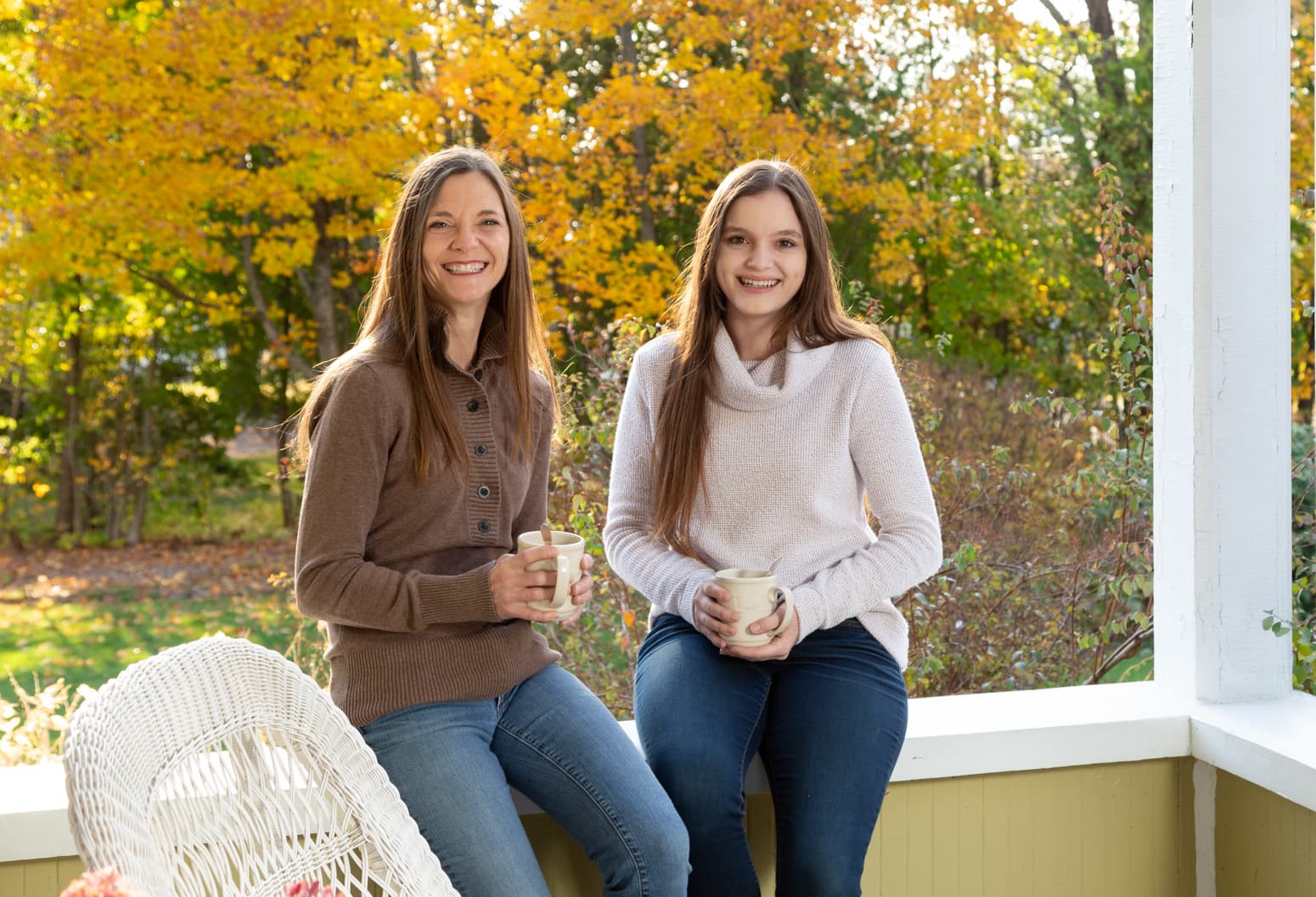 It wasn’t long ago that Dawn and Cassidy Gintz were staying at bed & breakfasts, dreaming of one day opening their own.

Originally from Massachusetts, Dawn was always drawn to classically historic homes and began to pass that affection onto her daughter, Cassidy, as she grew up. Living in Florida, they planned family vacations around the B&Bs they had been following and wanted to visit. Inns that not only gave them a place to sleep and breakfast in the morning, but that also had history and character. With innkeepers who were friendly and kind, and especially found joy in opening their home to others.

Dawn had purchased a book for fun, Bed & Breakfasts for Dummies, and would sit with Cass, passing the time on quiet nights by imagining what they might do if they were lucky enough … one day.

At the age of 15, Cass seriously approached Dawn and explained that she didn’t want to just dream about running an inn anymore. She wanted to start doing what needed to be done to actually own an inn. Wanting to be smart about this, Dawn suggested Cass look into starting her own small business, so she could understand more about what really went into entrepreneurship. So Cass started a small pet sitting business after graduating high school as the class Valedictorian, and Dawn began searching for seminars and consultations to find out more about the logistics of the innkeeping business. While she was excited about the opportunity, Dawn was also working full-time as a medical dosimetrist and was happy with her work.

After two seminars, the pair began to view their dream as a serious opportunity and set out to visit B&Bs for sale, looking for the perfect one. They traveled to Tennessee and Kentucky, up along the East Coast through North Carolina towards New York and New Hampshire, and all the way across to Washington and Oregon.

During one of these trips to Washington and the Pacific Northwest, Dawn was kayaking through the Salish Sea and fell in love with the rocky coastline. Broadening their search to similar coastlines, Cass and Dawn added Maine to the list of possible destinations. That is when Cass found the Captain Nickels Inn and fell in love! And it was gorgeous.

Often cited as “one of the most photographed inns along the coast of Maine,” it’s wedding cake design and soft yellow exterior nestled perfectly into the long green lawns that lead to a breathtaking Atlantic Ocean view. Plus, the surrounding midcoast area was already a tourist destination, filled with lobster shacks and roadside antique shops and nature parks. After a bit of negotiating and back-and-forth, this mother-daughter team purchased the property in May of 2019 and had their first guest that night!

Since then, they’ve focused on meticulously renovating the property to its historic grandeur, considering details like the wear-and-tear on new floorboards and the installation of custom-moldings around the windows and door frames. No longer are they waiting for one day to share their inn love affair with others – instead, they are working to create the new memories and experiences for guests that were so important to them, years ago.

When they welcome new and returning guests to the Captain Nickels Inn, Dawn and Cass have a simple motto: “Stay where you’re treated like family.” Whether that is Cass offering fresh-baked treats in the afternoon or Dawn chatting with you over coffee in the morning about the area and what to do, they are devoted to making every person feel at home in their home. And, Jace, our inn dog, cannot wait to make you his new best friend! 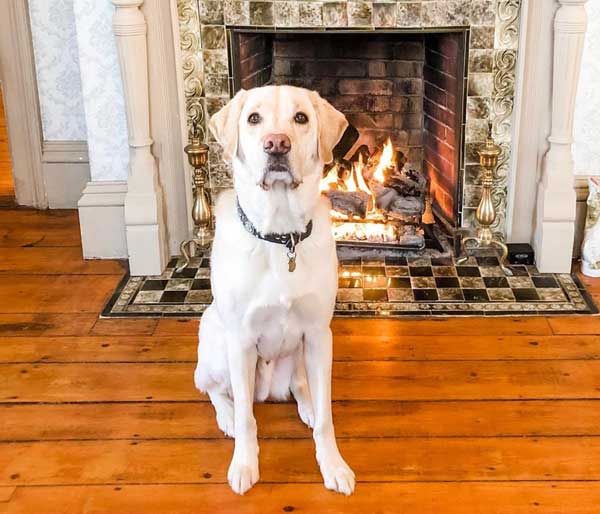