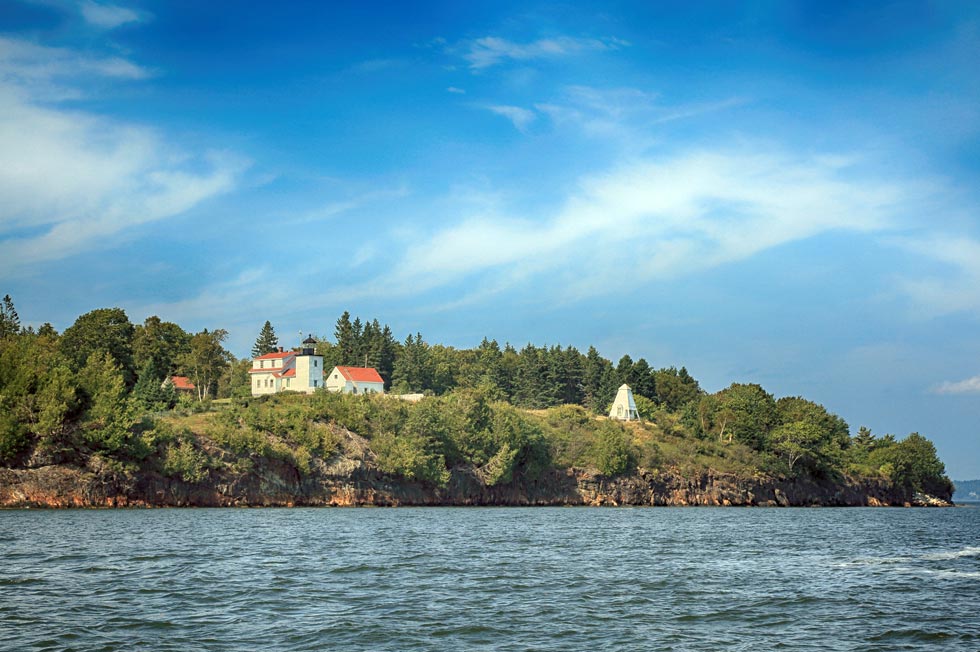 Looking to visit one of Maine’s iconic lighthouses and soak up some panoramic waterfront views? Fort Point State Park offers both and is just ten minutes from our Searsport bed and breakfast, Captain Nickels Inn.

Fort Point is a popular, 120 acre state park located in Stockton Springs, ME. Visitors to the park enjoy hiking, biking, picnicking, fishing, paddling, and spectacular views of the Penobscot River and Penobscot Bay.

The park is also home to the historic Fort Point Lighthouse and the remains of Fort Pownall, built in 1759. In fact, that’s where the park got its name. 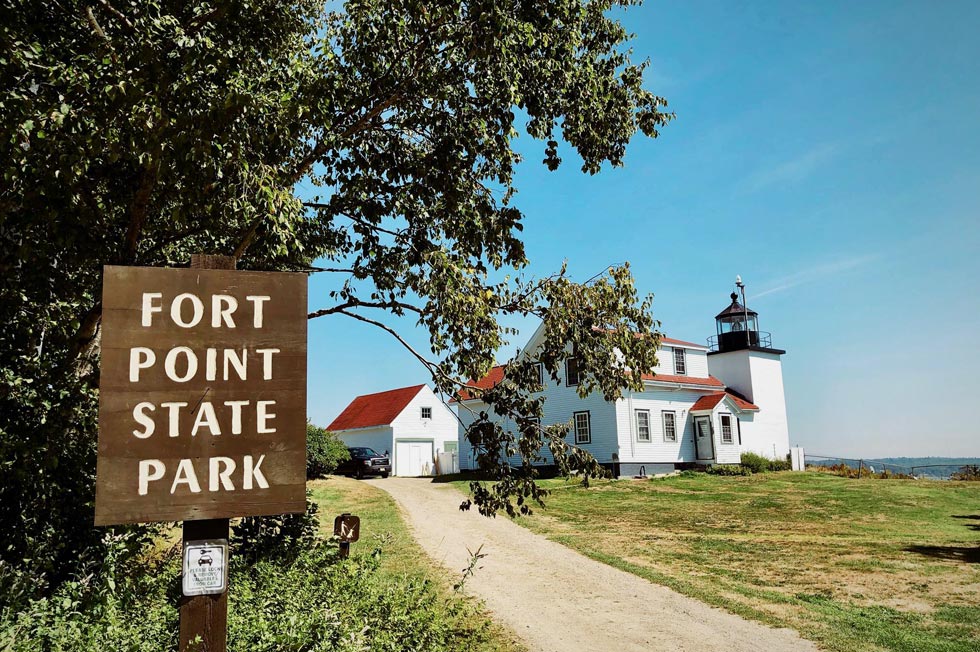 Fort Point was named after the point where Fort Pownall was built during the French and Indian War (1754–1763).

The Penobscot River was strategically vital for the English and Governor Thomas Pownall felt a fort should protect it. Ironically, the fort’s completion coincided with the end of the war, so the fort was never tested.

Remains of Fort Pownall can still be seen at the park. Nearby interpretive panels tell the fort’s story in greater detail.

Visitors can also view the stone marking the original burial site of General Samuel Waldo. Waldo who died in 1759 during a military expedition, inspired the name of Waldo County and two Maine towns, Waldo and Waldoboro. General Waldo’s remains were reinterred at the King’s Chapel Burying Ground in Boston.

The luxurious Fort Point Hotel also once stood here. This state of the art structure built in 1872 had running water, gas lights, a bowling alley, dance pavilions, room for 200 guests, and more. It was the largest resort hotel in the area but burnt down in 1898 and was never replaced. The hotel’s foundations are still visible at the park. 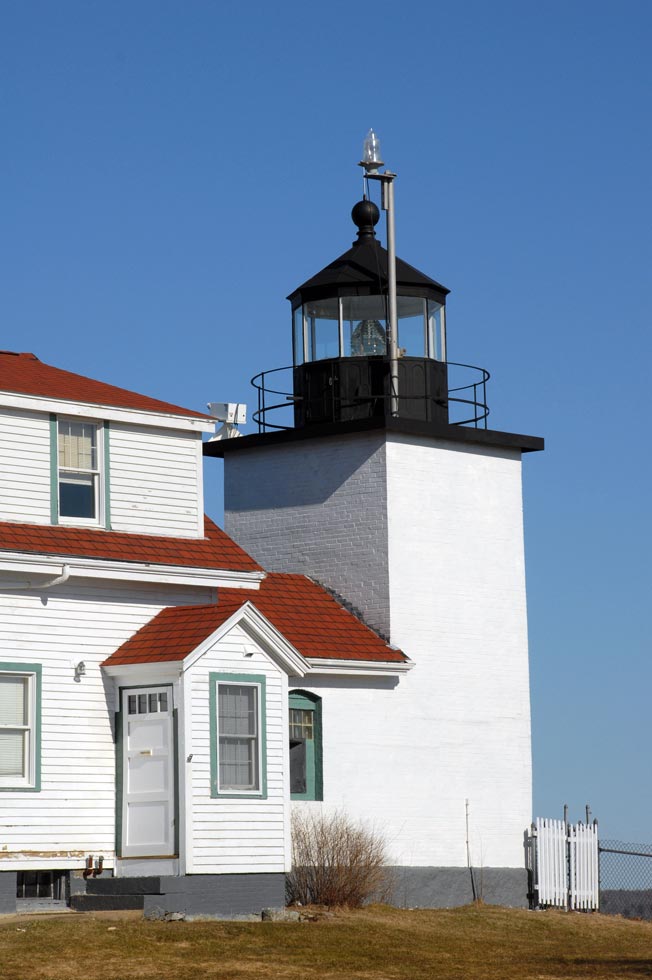 The lighthouse was built in 1836, at the mouth of Penobscot River, as Maine’s first river light. The light tower and keeper’s house seen today were rebuilt in 1857.

This uniquely shaped lighthouse, the only one of its kind in Maine, is square on the outside, with a brick interior, and traditional spiral staircase. The tower is 88 feet high above the water and the active light and fog signal are now fully automated. The original fog bell house and bell still exist and can be seen in the park.

The lighthouse is closed to the public but visitors are allowed to walk the lighthouse grounds and take photos.

Fort Point State Park is located off U.S. Route 1 at 207 Lighthouse Road in Stockton Springs, ME. As I mentioned above, this is just a ten minute drive from Captain Nickels Inn. The Fort Point light is the closest lighthouse to our coastal Maine inn.

The park serves as a fantastic picnicking location with expansive views of both Penobscot Bay and River. It’s 120 acres include more than a mile of rocky shore, a tidal sandbar, a 200′ pier, picnic tables, and trails. 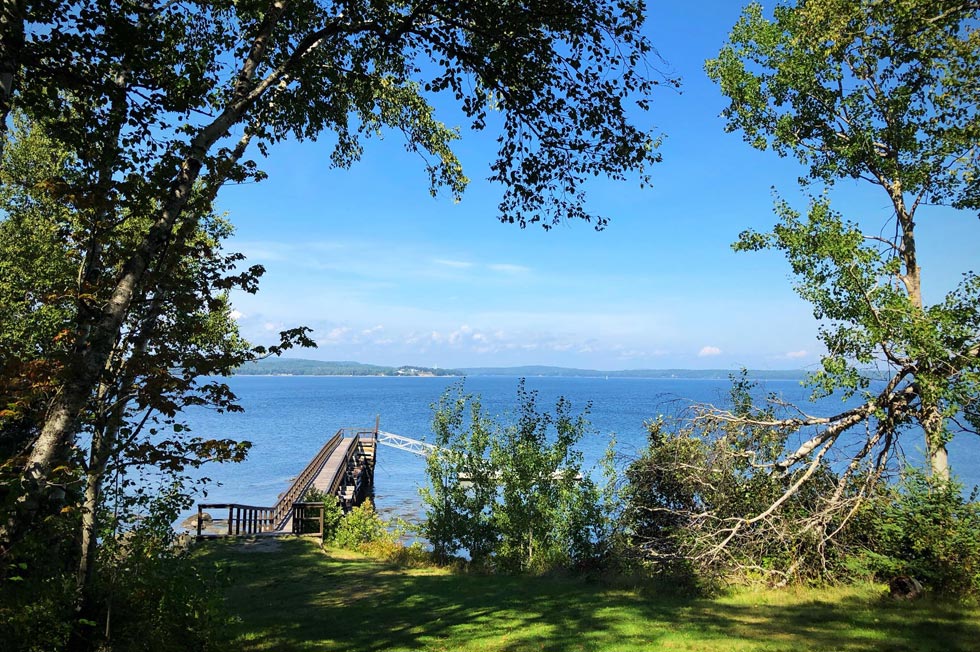 Trails in the park are easy to moderate, leading through field, forest, rocky shores, and historic sites. Cyclists will enjoy riding from the parking lot to the lighthouse or on the seven-mile loop around Cape Jellison.

The park habitat supports a diverse variety of wildlife. Visitors have seen deer, fox, osprey, eagles, porcupines, owls, and even the occasional moose. Seals, porpoise, and other aquatic creatures can sometimes be spotted from the park pier.

The pier is also an excellent launch, with floats for kayaks and canoes, or for fishing. Anglers use it and the surrounding shore to catch mackerel, stripers, and blue fish.

Fort Point State Park is open seasonally, May to October, 9am to sunset. Learn more at the park website.